The Jayhawks in Granada

your table at La Mimbre

How to come to La Mimbre...

a message or suggestion...

La Mimbre Restaurant was born in 1890, with the initial function of a kiosk for the travellers coming up to the Alhambra neighbourhood.

This little wooden kiosk remains immortal in a painting from Juan Fernández Barba, being the only testimony of what it was. The passing of time has done of this small place what it is today, a two fork category restaurant. From a spot to rest on the way, it became one of Granada’s most renowned restaurants in 1978.

This magnificent place is located in one of the most amazing places of Granada, and it has hosted in its rooms a number of celebrities in the domain of art, music, writing, politics or sports. Rafael Alberti, Antonio Gala, or the international Granadian Miguel Ríos have left their impression as they passed… Alberti, for example, marked his visit in the form a drawing that he later gave to Cándida and Felix.

Maintaining its elegance and aesthetics, this restaurant, as much as the excellent wines in its cellar, has known how to age in a extraordinary way, gaining taste and flavour, and leaving space for Granada’s new gastronomic tendencies.

In the late seventies, La Mimbre went from a simple kiosk to a meeting point for artists, bohemians, travellers seeking a place with a Granadian taste and many, many unconditional lovers of the beauty of the Alhambra and of Granada. The people undeniably responsible for this extraordinary transformation are Cándida and Félix, as they bet for quality and good service accordingly to the natural beauty of the environment, the charm of the Alhambra forest. 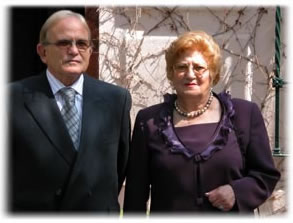 Today, when Granada and the Alhambra are reaching their highest level of recognition as a cultural and touristic model of leisure and services in Spain and the whole world, La Mimbre Restaurant is already a consolidated representative thanks to its excellent professionalism and dedication, in addition to the charm which has become historical.

A well known foreign journalist, settled for long time in Granada and properly acquainted with the city, its people and uses, explains that there is no one as wiser in the Alhambra as Félix “from La Mimbre”, as no one has lived and worked there as much as him.

Visit La Mimbre Restaurant in the Alhambra forest, and you will remember it forever!!